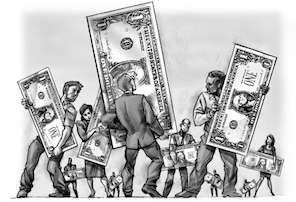 When looking at the New York Times’ David Leonhardt’s fascinating research on how your location determines your income mobility, there are some obvious conclusions.

We all know that there are certain areas where poverty is rampant and multi-generational.  Those are areas where we would expect income mobility to be low.

What is striking is that even the earning potential of the affluent is affected by location.  In areas designated below average in income mobility, future income is also diminished for high income households.

However, what if low income mobility areas greatly outnumber high income mobility areas?  There are certain regions of the U.S. where some combination of family traditions, marketable skill sets, and quality of life concerns limit where you are willing to move.  A look at the U.S. map shows there are very few states that are effectively avoiding this problem.

Areas in blue and green indicate good income mobility, while red and orange areas suggest improvement is necessary.  Though it appears that the Great Plains region is excelling, the South and Southwest regions are not.

Therefore, what can be done to boost income mobility, so that overall living standards improve?

Perceived cultural differences drive residential segregation patterns.  When there is the presence of unruly children and lack parental involvement in the schools of some communities, upwardly mobile parents are reluctant to place their children in those schools.

This mindset has implications that drive all five of the above factors.  White flight emerges and drives them away from blacks because there is a perception that black families have discipline issues and devalue education.  High income families isolate themselves from low income families for similar reasons.

Regions where there are one or two good schools surrounded by a number of under-performing schools can stigmatize a region and reduce overall investment and job creation.  Those economic factors often drive up violent crime and result in more unfavorable family compositions.

In order to address this problem, we must realize that solutions must come locally, rather than nationally.  In an era of high federal deficits and strained state budgets, it will be difficult to solve these socioeconomic problems with an influx of public funding.

Instead, it will take strong and inclusive civic leadership where serious dialogue takes place on race and social class.  Identifying influential leaders covering a broad spectrum of the community, including industry, education, non-profit organizations, and religious institutions, will be essential.  Establishing parameters that allow for free-flowing dialogue will be challenging, but necessary to overcome the wall of fear and mistrust.

Communities committed to active engagement and willingness to seek common ground on difficult issues will thrive.  On the other hand, communities accepting the status quo will continue to wilt.

Are you willing to start the dialogue and push your community forward?

While not agreeing with all of the points made by Paul Ferrell of MarketWatch, his editorial on U.S. and Asia economic prospects was thought-provoking.  Mr. Ferrell’s premise is that the intransigence of our U.S. Congress is affecting our future economic competitiveness due to lack of investment in infrastructure and insufficient public education.  While agreeing with that, he might be overplaying the long-term strength of Asia’s economic prowess.

Asia is a region that still has significant challenges.  Japan has been in a rut for the last couple of decades with deflation wrecking their growth prospects.  Even with China enjoying remarkable growth, they have encountered some issues recently.  Their economy still remains under significant government control with private financing access limited.  They also have done a poor job in protecting intellectual property rights, so they must continue to resort to espionage and stealing of commercial secrets in order to maintain their competitive edge.  In my mind, that’s not a sustainable strategy.

While both India and China’s urban and coastal areas have experienced great prosperity, there remains large swaths of land where people live in grinding poverty.  Their living standards are below the world average and rectifying this from the state level will be very challenging.  In China, we are starting to see some chinks in their armor as Chinese workers are starting to demand higher wages.  As they transition to a middle-income country, they must find a way to maintain productivity gains as their labor costs rise.

Reverting back to the U.S., it is obvious that Mr. Ferrell is not a fan of the military buildup over the past decade as we try to fight the endless war on terrorism.  However, we must realize that military spending is an economic driver and job creator.  It also enables us to influence and protect our economic interests abroad that can be compromised if non-market friendly regime emerges.  Having said that, it is true that budgetary pressures and other demands within our borders means that we do have to be smarter and more efficient with our defense dollars abroad.

As for infrastructure, this is a point that I most agree with Mr. Ferrell.  Our transportation system is in need of more attention and encouraging more investment in natural resources and technology will be a key to maintaining our competitive edge globally.

On the other hand, there have been successes in energy for the U.S.  In contrast to Europe whose large investments in alternative energy have yet to pay off, the U.S. has been very successful in natural gas production, which is significantly cutting our energy costs for industry and households.

Mr. Ferrell is also right to be concerned about the state of education, but its solution goes beyond funding.  Correcting the culture toward intellectual curiosity and addressing the breakdown in family structures are socioeconomic challenges that must be addressed first before we can see improvement in educational outcomes.  Lack of male role models and the prominence of single-parent households are proving to be difficult obstacles to overcome.  With demands at work, it appears that child development has suffered as a result when the parental roles are not shared.  As a result, the skill gap between the low- and middle-income households relative to high-income households is a major threat to having a diverse, healthy economy.

Even though America’s global economic dominance is starting to wear off, it is too premature to assume that Asia will be able to fully capitalize on it.

During Obama’s State of the Union, he brought up raising the minimum wage from $7.25 to $10.10 an hour.  If Congress passes this piece of legislation, then all employers cannot pay any worker below $10.10 an hour.  This issue will certainly face stiff opposition in Congress, who are concerned about burdening employers in an already difficult economic environment.  However, poverty and income inequality remain troubling concerns that need to be addressed.  Then there’s the troubling age unemployment gap where the teenage unemployment where it is at 18.8%, compared to adult men of 5.3% and adult women at 5.1% as of January 2015.

Is it not possible to find common ground by offering a two-tiered minimum wage that could be a more effective tool in addressing poverty, while providing teenagers with more opportunities to increase their workforce skills?

Proponents believe that a higher minimum wage will help lift the working poor out of poverty.  It is certainly difficult to raise a family on $7.25 an hour.  If a low wage worker can maintain the same number of hours, then obviously earning an extra $2.85 an hour will be very helpful.  This extra income can be beneficial to relatively low income communities, such as Albany, GA, which could see more economic activity as more dollars circulate throughout the community.

For instance, an individual could still be worse off if a higher minimum wage means results in significant hours being cut.  For instance, a worker making $6 an hour and working 40 hours a week ($240 weekly wage) is better off than making $10 an hour, but seeing their hours cut to 20 hours ($200 weekly wage).  Even if their hours are not cut, then would they be better off if employees had to bear more of their health care costs.

So which side is right?  That’s debatable, but innovate policy prescriptions could end up satisfying both sides.  Most economists believe that current minimum wage legislation is poorly targeted.  Rather than addressing the issue of households not receiving enough income to get out of poverty, it mostly impacts teenagers, who find their services underutilized by firms opting to go with more experienced workers.  This wage inflexibility has hurt our youth significantly.

When looking at the sustainability of the US economy, we need to find ways for our youth to work.  They learn at an early age about dependability and the value of working consistently.  It also enables them to develop their skill sets and attain real world experiences that can help shape their future career possibilities.  When they cannot find work, that can lead to less than desirable employment outcomes in the future.

In order to solve this problem, why not go with a two-tiered minimum wage where the minimum wage is $7.25 an hour for workers between 16 and 19 years old and allow the minimum wage to jump to $10.10 an hour for workers 20 years or older.   This would serve two purposes.  First, it will make teenagers more marketable, so that they can gain valuable work experience.  Lastly, it incentivize youth to seek more education through either college or trade school more worthwhile because working full time will not be as satisfying.

There is precedence for paying workers different compensation for doing the same work.  Think about teachers where first-year teachers make far less than tenured veterans.  It is not like the responsibilities of a veteran teacher is that much different from a first-year teacher.  They both need to develop similar curriculum plans, conduct classroom activities, and perform departmental functions.  Teaching our youth about delayed gratification and “paying your dues” is an important lesson to learn.

There are downsides to this strategy in that higher adult minimum wage will be more burdensome to small businesses.  While large chains, such as McDonald’s and Burger King, can rely on significant economies of scale and technology investments within their business model to absorb higher labor costs, less resourced small businesses will find it difficult to adjust to shrinking profit margins brought by more expensive low skilled workers.  In particular, day care centers where many of your low-cost start-ups occur could be particularly vulnerable where current child care workers earn a median wage of $9.38.  Additionally, a 19-year old teenager, who is about to turn 20 years will be particularly vulnerable when his wage jumps by almost $4 an hour.  Suppose he or she needs to support a family.  This jump in wages will make him or her more vulnerable and replaceable.

Certainly, the two-tiered minimum wage has its faults, but its potential to alleviate poverty and increase teenage worker productivity are worthy, enticing pursuits.