After experiencing optimism earlier in the year, there are signs that the U.S. jobs engine might be slowing. Certainly, the turmoil experienced in China, Europe, and the Middle East are finally starting to drag down the economy.  Then the lack of robust business investment is especially problematic.  Unless that turns around soon, we might be approaching recessionary status.

The Bureau of Labor Statistics released its jobs report for September and it showed a steady unemployment rate of 5.1 percent with an increase of 142,000. Labor force participation rate continues its steady trickle downward to 62.4 percent, though the employment to population ratio showed a modest tick up to 59.2 percent.

Even though the unemployment rate remains steady, the rate of job growth has slowed. Over the last three months covering July-September, we have experienced an average of 167,000 jobs. That is almost a 30 percent decline from last year’s rate.  With construction, manufacturing and wholesale trade showing little change, that offers a hint that this downward trend could continue as we head toward winter.

It is troubling that business investment hasn’t followed suit with consumer spending.  Though household spending has been relatively healthy at 3.2 percent over the last year, we cannot say the same for industry. 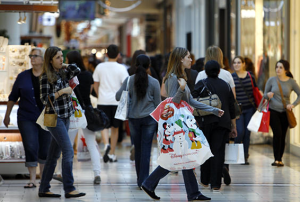 Even though some of that can be attributed to uncertainty from various political and global events, it will be difficult to maintain a robust economy without further investment.  Both shipments and new orders of core capital goods have shown negative growth over the last year. 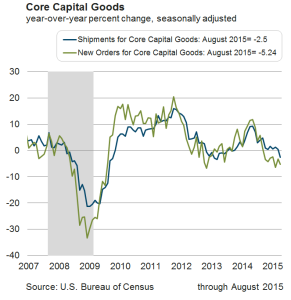 Another issue is that wages remain stagnant.  Over the last year, wages have grown at a 2.2 percent pace, which is well below what we experienced pre-recession.  Until we see wages approach the 3 percent clip, it will be difficult to imagine a more robust economy in the future.

Is this the beginning of a downward spiral?

The U.S. Bureau of Economic Analysis released its preliminary estimate of 4th quarter results and it shows that economic growth slowed considerably from last quarter’s torrid pace of 5 percent to 2.4 percent.  This estimate should be viewed with caution because it is based on incomplete data and further revisions will be released in the future.  Having said that, it still remains a decent figure and is more in line with what we experienced throughout the year.  If this quarter’s growth were to receive a grade, it would be C+ without a curve, but an A with a curve.

What to smile about 4th quarter growth:

What to frown about 4th quarter growth:

Overall, we should still be encouraged by these numbers.

You might have noticed a spike in gas prices over the last couple of weeks.  Neil Shah of Wall Street Journal’s Real Time Economics reports that crude oil prices are at a 52-week high.  Specifically, crude oil prices have risen to $108.05 a barrel.  When looking at the market for gasoline, the price of gas is affected by the market forces of supply and demand.

There are four factors that affect supply.

In this case, we want to focus on input prices.  Regarding inputs to providing gasoline, think about labor, land, and capital.  In this case, crude oil is considered land, which refers to any natural resource.  Without crude oil, it is impossible to produce retail gasoline.  Crude oil is accessed by refineries, who are then able to convert it into retail gasoline used by cars.

There are five factors that impact demand.

When Shah stated that greater economic optimism is causing prices to rise, this relates to the first and second factors of demand.  When an economy is improving, that means incomes are rising and consumers are more likely to drive and travel because they have more money to spend on shopping.  Even though the unemployment rate remain elevated, consumer spending has been trending up.

It was a little confusing when Shah referred to a boom in American oil production.  That typically results in an increase in supply and drives prices down.  However, that would explain previous dips in prices.  What is happening now is that the utilization of refineries are near full capacity at 90.7% as of the week ending on June 28.  In fact, U.S. refineries are operating at the highest level since 2007.  That indicates that driving activity is on the rise and that would place upward movement on prices due to the first factor of demand again.  If the utilization of refineries start to fall due to refineries expanding capacity through improved technology, then that would be an example of an increase in supply that would drive prices down due to the second factor.

Speculation also plays a role in gas prices and we can look to uncertainty with Egypt.  Even though Egypt is not a major source of our gasoline supply, political turmoil there could impact global supply.  This scenario would be consistent with the first factor dealing with supply.  In this case, prices are driven up not by current market forces of demand and supply, but potential future disruptions in oil supply if the Middle East experiences more political instability.  If disruptions are severe enough, then that would drive the price of crude oil up, which is an example of an input price.

When wondering why gas prices change, one can often look to the market forces of supply and demand.  However, we must also realize the role of market speculation in influencing gas price movements.